Codifyre is a podcast about emerging trends in the culture of technology, software languages, security, and skills. The aim is to create entertaining content for everyone from coders to sales gurus looking to stay clued in.

Well yes. There's always a simple answer to these questions and it's yes. Breaking it down to the basics, pretty much all of our devices are listening because we've enabled Siri or Google or Alexa or… to respond to a keyword command like "Hey Siri" such that they can present us, in the case of Siri, with a spooky HAL 9000ish blob to indicate it's listening (because it wasn't before honest) and ready to perform our bidding.

#14 - Mobile Security: The Inside Job

This was going to be a comparison of major phones, breaking down some of the exploits and weaknesses.  I was potentially going to compare IOS to Android and throw fuel onto an already raging fire amongst smart phone enthusiasts which is, if you’re listening to a podcast, all of us.   Maybe you’re not a geek or a gadget nut but you’re probably far more dependent on that device that you may realise.  You’ve probably never really put a great deal of thought into how much of YOU is locked up in that phone.  You might even have a Kanye-West style pin code like 000000 to unlock it (if you didn’t see the article I posted on the Codifyre Facebook page about the worst passwords and pin-codes of 2018, it’s worth a read.  Kanye tops the bill.

Let’s start with what’s in your phone.

#12 - Staying Relevant in a Tech World

Once a new technology rolls over you, if you're not part of the steamroller, you're part of the road.

This is one of those podcasts which isn’t the offspring of late night research, countless hours of trial and error tempered by seminars, articles and other people podcasts. This one is coming from real life… whatever that means.

This one is coming from real life… whatever that means.

If you’ve found yourself working in the technology arena it can be as exciting as it is challenging. Sometimes these are one and the same and sometimes they could not be farther apart. Being a GenXr myself I was there at the beginning of the home computing boom. I remember the rise of Steve Jobs, and when Bill Gates was the young genius instead of Mark Zuckerberg except of course when he famously said “640k is all the memory anyone will ever need” or words to that effect. Ok fine he didn’t say that but, thanks to the post-truth world I think it’s probably perfectly ok to attribute that statement to him or anyone else for that matter. Even better if you turn it into a meme!

Getting back to the 80s and 90s when technology was “young” and when air-quotes were first invented (I was thinking some as I typed “young”). Back then I learn to program in C language, I could disassemble my PC and fix it myself, even over-clock the CPU to get more gusto from it and I was building linux kernel I got from Linus Torvalds (the OS namesake) himself because that was the only place you could get it. I will return to Linus as a flagship example of staying relevant in the technological age as he one of the most influential people in our technological era.

Let’s talk about that era. We are currently in a phase of advancement which is to say the least, complex.

Check out the full blog at

#11 - Hacking Hackers and their Hacks

Is it cast aside teenage wunderkinds who can seemingly dissect all things computer with the crack of a laptop to create designer chaos?  They are portrayed smoking cigarettes, roller blading and always have media savvy branding!  Too cool!

Any time a major breach is announced, the media conjures up their classic image of this hooded jedi-like figure in a dimly lit room with 0s and 1s swirling about. Film and TV has done a superb job of portraying our favourite computer hacker as the stereotyped quirky yet heavily crafted indie kid who wields the required dexterity to power-type at a moments notice, anywhere on the planet and inject themselves straight into anything from corporate servers, to traffic light control systems to Dinosaur based fun parks. It usually involves some superb visualisations of neon landscapes and swirling equations.

In the episode I unpack hacking and what it really is, with a few notable examples from the past few years.

Warning! I may debunk Hollywood's sexy portrayal and expose hacking for what it really is... good ol' fashioned elbow grease.

The shownotes for the episode are here.

The Internet of Things! Oh! That! The Internet… got it… Of… no problem… Things… nope you lost me.

When I first heard the term IoT I had no f*cking idea what it was and what it meant. Obviously it was made completely clear when I was told what it stood for…

How long did it take, and who came up with that catch phrase?  And why on earth did it stick?  Internet of Stuff would have been IOS and we can’t have Apple breathing down our necks. Internet of Devices? What stopped us there? The Institute of Directors perhaps? Those biz savvy suits play hardball about being top dog on the google search so we couldn’t usurp that acronym. So here we are with IoT.

Regardless of how we got here… IoT is a buzzword/acronym/TLA (three letter acronym)/phrase which only through the atrition of use is starting to become somewhat understood.

Defering to wikipedia (give that guy some money) it’s defined as: “The Internet of things (IoT) is the network of physical devices, vehicles, home appliances, and other items embedded with electronics, software, sensors, actuators, and network connectivity which enable these objects to connect and exchange data.” 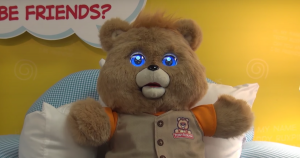 It’s that last bit… the “network connectivity” that is the critical new element that creates IoT.  We’ve had the “physical devices, vehicles, home appliances, and other items embedded with electronics, software, sensors, actuators”…and of course the machine that goes “ping!” for a while now in the form of TVs, toasters, baby monitors, lawn mowers, ovens, heart monitors and teddy bears. Yes Teddy Bears. I’m thinking of that old scary Teddy Ruxpin thing from the 80s. It haunts me in my nightmares.

Read more on our blog/shownotes page.

Get this podcast on your phone!

Play this podcast on Podbean App